Successful livestock, dairy and poultry producers and their related industry partners provide sound animal care on commercial farms and harvest plants. Most animal and meat producer organizations have guidelines that are consistent with sound science and a consideration of economic realities.

In the early 2000's, food associations representing their retail and food service corporate members asked producer groups to develop and send species-specific guidelines for their review. After consideration of adoption of all or part of these welfare guidelines, the retail and food service companies had an expectation that plant and on-farm audits of farm animal welfare would begin.

Many species groups have some degree of well-being programs in place, ranging from educational to auditable:

The National Pork Board has evolved several programs into the current Pork Quality Assurance Plus (PQA+) program, which is designed to cover best management practices and welfare. In addition, they have a Transportation Quality Assurance (TQA) program in which transportation welfare is addressed through training and certification of transportation is offered. Recently, they facilitated the development of the “Common Swine Industry Audit” involving producers, packers, customers and other stakeholders.

For many years, the North American Meat Institute (NAMI) Foundation has developed and revised a meat plant slaughter audit covering cattle, swine and sheep from delivery to the plant until death. This is widely utilized by their industry and customers.

There are multiple assessments and audit programs in this industry. They range from educational to verifying welfare practices.

The National Cattlemen's Association and its state affiliates use the Beef Quality Assurance program as their educational tool. The beef industry is working to organize its guidelines and audit programs.

In 2016, the Alberta-based National Cattle Feeders Association launched an audit tool developed by stakeholders in this area of cattle production. The audit covers from delivery of cattle to feed yards to load out to packers.

The process by which harvest plant and on-farm animal welfare auditors are qualified, trained and certified continues to be developed. Many groups and PAACO require the plant and on-farm auditors and audit firms to have specific qualifications, experience and abilities. The organizational members of PAACO are professional, independent, science-based groups that have come together to initiate training and certification for on-farm and harvest plant auditors. 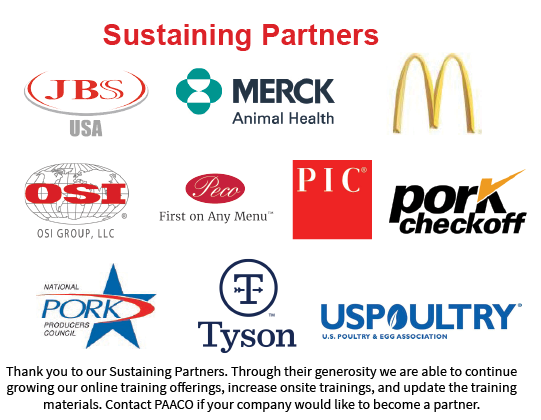 We hope you are staying healthy and safe. To those of you working in plants, transport, and on farms, we thank you very much for your efforts and long hours!!!

As you can imagine, our training schedule has been disrupted. We are rescheduling all trainings through at least May 15. If you are registered for a training during that time and we reschedule it we will contact you as soon as we know the new proposed dates. Each month, we will assess and move other trainings as needed. It is our intent to hold at least one training of each type in 2020 unless circumstances dictate otherwise.

Some of you have asked about waivers for continuing education requirements. At this time we will not be offering blanket waivers because each of you has a year to complete them, BUT, if you were scheduled to attend a meeting that was cancelled, please contact us and we’ll help you explore alternatives.  We are working on a list of online options and as always internal meetings that you have on the topic of animal welfare, handling and/or health will count toward your hours.

All the best from the PAACO Team